Geo goes to the movies: Coraline 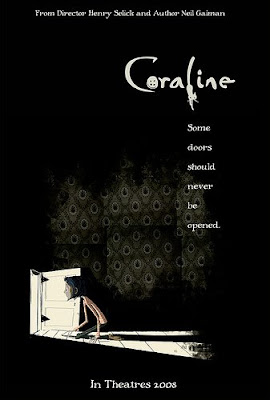 I love 3D. I don't get why there aren't more 3D movies - it's just a great thing. Beowulf in Imax 3D was amazing and I'm hoping there are more and more 3D movies made...if you're going to animate something, add in the 3D element. Because you can. It's cool...we all need more coolness in our lives.
This weekend I got to go and see Coraline, a great 3D childrens film. It's based on the kids book written by Neil Gaman (a favourite author of mine) and the animation is designed and produced by Henry Selick - the mind behind the animation of the Nightmare Before Christmas. It is the same amazing animation...AND it is in 3D. It is captivating.

This film is full of imagination, spooky characters and strangeness. Amazing things like acrobatic dancing mice, button eyed parents, eccentric neighbors, evil bat terriers, and a strange duplicate world on the other side of a tiny door...it was all so full of imagination and creativity. If I had kids I would love to take them to this...it was a little bit scary, but the cool kind of spooky that would be OK for most older kids. The animation was amazing. It made me feel like a kid again. 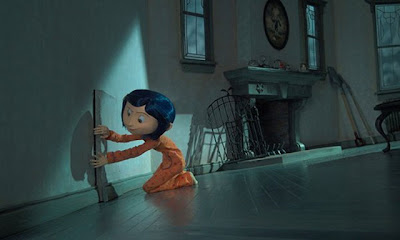 If you get the chance to see it, even in plain old 2D, do so. Or (crazy talk I know) you could even read the book. It's worth it.
Labels: This film

MaCanuck said…
I've taken to listening to books these days. If you have a chance, listen to Anansi Boys from Audible. Apparently, Neil wrote it with the narrator in mind, and he does a bang up job on it. It's one of Neil's young adult books, too.
2/10/2009 11:02 a.m.