Han was WAY cooler than Luke 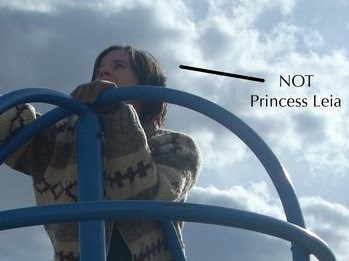 In my home town, in the schoolyard there is an old rocket monkey bar set. It was a spaceship with a fireman's pole down the centre...we spent every recess and so many evening hours playing there. Sometimes Indiana Jones...sometimes the Dark Crystal... but mostly Star wars.
It was the Mellinium Falcon.
It was the Death Star.
We saved the galaxy over and over again...
We would play until sunset - home time. As the tomboy and only girl tough enough to do my own stunts I was always quite frustrated on the days when I had to be the Princess Leia. On a good day I could be Vader. On a REALLY really good day I was Han Solo. :)

When my brother and I went home a few years ago we wandered about to see old haunts and I crawled up to the gun turret of the Falcon for one last look. I could see the tie fighters at a distance...and I was totally not princess Leia...
Labels: memories

Luke Skywalker (Rob was always Han) said…
The inner geek in me just teared up a little bit...

Pacian said…
Maybe, but Lando was the absolute coolest.