Shoulda had my space suit on 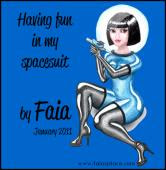 I can tell I'm unwinding from stress...I had the weirdest dream last night.

From what I can recall (it's fading fast) there was an epic event where people from the future and I and a few others had stopped a doomsday device (he hee doomsday device) from the future from exploding and saved the world, and then, to make sure no one found it, the future people came through the sky in a time portal and used a big crane off the edge of their ship to lift the device (which had a large platform on top of it) out through the sky and into space across the galaxy, where no one would find it. I was with the device, making sure the crane was hooked up properly...and then as I was lifted up in to the air, through the portal and into the darkest regions of space I was in awe. My jaw literally dropped as I looked all around...and it was beautiful...and then, to be honest, I was suddenly overwhelmed by the fact that I was in the deepest darkest space in a freezing vacuum and all that was keeping me safe was a little force field and I panicked...what if they just left me there?

...and woke up to J waking me up...apparently I was moaning with distress in my sleep. I must say - it was an incredible view...I definitely need to get in to space before I die...but next time I'm totally taking along a space suit. :)

And then there's this song. It's been in my head since I woke up. Enjoy :)
image
Labels: space the final frontier

Pacian said…
Yeah, cool "dream". Now give me my doomsday device back!