Damn it feels good to be a gangster 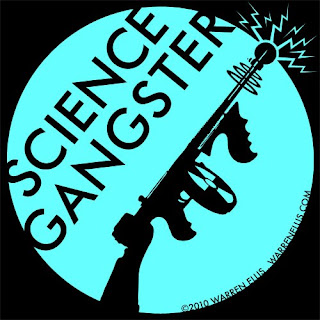 My science gangster shirt arrived friday...heh heh. I'm wearing it right now. :) Mee hee.
This weekend was a workfest.
I have sanded and primed my cupboards and the tiles are grouted-that stressed me out, as I'd never done it before, but it worked pretty well. I sanded, primed and painted all the holes in the walls from the wiring so they look normal again...I did well, you can't tell there were ever holes! The best part was when I put the first coat of blue paint on the cupboards yesterday...it looks GOOD. Oh and did I mention I also spent most of saturday helping J's brother & family move into their new house? Then, in a moment of insanity I invited my brother and his wife over for supper yesterday. I used George in my nearly nonfunctional house to make a big supper of roast and such, along with 2 kinds of pie. Lime for us and raisin for Dad (thanks Grapecat-Dad said it was good and to say thanks for the recipe). I had the whole crowd over because I wanted to get together one last time - Dad has decided to head home today. He's done every possible repair to the house we could think up (seriously....everything we can think of...we've never had such a functional house...) and he says he wants to head home for a few days. He has some things to do there for his brother and he is doing better than he was. Although he'll be lonely, I know it's the next step. He didn't want to put it off too long. I'll miss him - it's been nice to have him here and be able to help him adjust and look after him. I know it'll be hard for him, but I think he'll be OK...just lonely. That will be the hardest part I think.
It was a bit of a nuthouse yesterday (OK all weekend really) and things are still largely in disarray, but it's' coming along. I can see the end. One more coat of paint on the cupboards and I have to seal the grout and then I can put things back in the kitchen. This weekend I can finish the doors and then we can put them back on too. Luckily you can buy new nice hinges that are the same size as the old ones (and don't suck) so they should go back on quite simply. Then the handles. Then I can stop and just come home and do my Master's like I'm supposed to be doing.
Heh.
The end is in sight.
And I have mashed potatoes and gravy for lunch.
Damn it feels good to be a gangster...

glad the pie worked - sounds like you're gonna need a hell of a nap before you get to the studying. good luck with it all - make sure you're getting some time to chill out though - eh? you need space and rest to get those brilliant ideas.