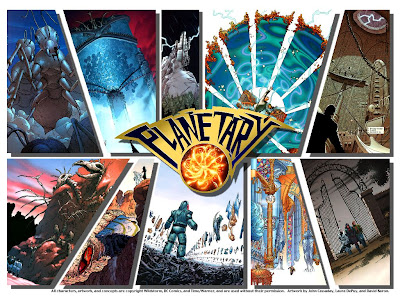 Lately I've been reading all the Planetary I can get my hands on. It's been cold and rainy and the other book I'm reading is a beginner's guide to string theory and the science involved in it (Universe on a TShirt: Quest for the theory of everything) so this is a light read with a cup of tea here and there to break it up.
A friend of mine (lucky guy) realised his dream this spring of opening up a comic store -very nice one too. He recommended the Planetary comics to my friend Magnus, who leant them to J who raved about them crazily, so I read them too. 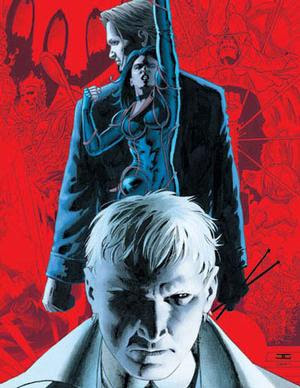 The artwork? Well, one word -Wow. Incredible. Worth reading for it alone.
And the stories of it? Well, Planetary is "Archaeologists of the Impossible". Really interesting - the idea of a group of people with unusual abilities, coming across myths, characters and ideas from history and fantasy and other dimension and even other comics and trying to deal with them and protect us all makes for great stories. Anything from Mothra to giant ants to Dracula to Tessla is fair game. Funded by a mysterious Fourth Man, the field team consists of Jakita Wagner who is strong, fast and nearly invulnerable, The Drummer, who can detect and manipulate nearby information streams, computers and electronics (and is somewhat insane), Elijah Snow, who doesn't seem to age and can extract heat from nearby substances at will, and the former third man Ambrose Chase who can phase time and the laws of physics around himself.

There is also a crossover book, where the Planetary world meets other comic characters and we see how they interact...where depending on the dimensions, people are not themselves. Haven't finished it yet, but I'm enjoying it so far.

I would highly recommend them to anyone looking for an interesting read. I'm a fan, as is J who is not a comic guy- Planetary deserves a read if you like the idea of "Archaeologists of the Impossible". Each of the 3 volumes has 7 or 8 stories, and they are all really interesting and different. There is a master plot running through them all as well...I'm waiting for them to put out the last compilation to see how it all comes together.

Have a good weekend all...I'm off on this rainy day to sequence part of my own DNA. Cool Huh?Yup, I get to be my control patient for a study. Me hee...